Each child attending the High County Stampede Rodeo Saturday night received a little horse on a key chain. Abby June thinks it’s magic. She holds it so carefully, and talks to it while she eats her lunch. She sets in down gently before she eats and she tucks it in bedside her at night. A girl and her horse.

I managed to capture some of the magic in the photo below… and, once I transferred it and saw it on the computer monitor, it made me immediately think of another time someone held something so dear in just the same way with just the same sweet voice. 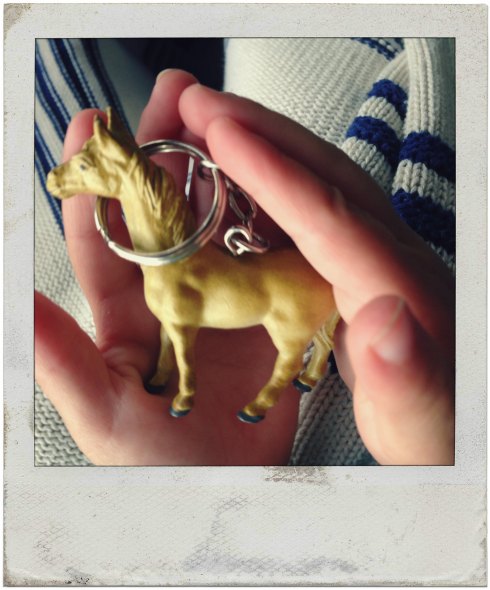 In September of 2002, I drove from San Diego, California to Grand Rapids, Michigan in my little red truck pulling a heavy-laden u-haul. My co-pilot from Cali to Denver was my boss, idol, and dear friend Heidi. We stopped the first night in Vegas, after overheating somewhere near Bakersfield (but that is another story for another day). The second night we slept to somewhere near the Grand Canyon. I lost a tennis shoe out of the back of the truck on the way there… I do still believe there is a deer in those woods with a Saucony trainer on his antlers.

I can see all these photos in my head as I remember the trip… they’re all on real film in boxes I haven’t transferred to cds yet.

The third day we drove through Zion, by far my favorite of our stops. Someday, we’ll do that trip again and spend all our time there instead of tourist-trap hopping. We took the shuttle to the trailhead and then hiked our way down the river, stopping to pose on various mid-stream rocks and admire the view along the way. We had only a day. One beautiful, warm, sunny day.

At lunch, we stopped in the tall grass and began to pull out our food. Just then, absolutely then, Heidi found a tiny little tree frog. You who know Heidi will be able to picture what follows, but I will do my best for the rest of you. She was absolutely thrilled. She was enchanted. She was in love. She scooped him up and held him high and danced with him in the sunlight. She brought him close and whispered that he was beautiful and very precious to her heart. (She did.) And I laughed and cheered and twirled along.

Heidi set him in back in the grass and wished him well. Be well! Be happy!

It was at the very second… that very millisecond… that very split-hair of time after the sweet frog prince got his footing in the grass again… that a large shadow swooped down from above, grabbed the frog, and took him up to the tree above.

Where he was eaten.

The hawk ate the frog.

TexasNorth is a little farm in Western Michigan. It's home to 5 chickens, 25 longhorn cattle, a coonhound (Banjo), 1 barn cat, a husband, and 3 ridiculously funny children. The mom of this zoo has been known to mow the lawn in a skirt and roast marshmallows after dark. END_OF_DOCUMENT_TOKEN_TO_BE_REPLACED
This entry was posted on Monday, July 28th, 2014 at 7:05 am and tagged with circle of life, zion national park and posted in writing. You can follow any responses to this entry through the RSS 2.0 feed.
« progress
It is finished. »

2 responses to “in a blink”

talk to me Cancel reply