That boy up there and I crossed off 9 years of marriage yesterday.

It is my greatest journey of discovery and sacrifice: to choose to love and be loved every day. I am reminded daily that this is the tangible proof of a story- THE amazing story–  whispered in my ear so very long ago: I am loved so much, another man died to self in order to set me free.

Thank God, in all earnestness, for that.

This past weekend, Curt and I abandoned the children and drove to Chicago for the first time in 8 years.  We stayed at a “nice” hotel… three out of 5 stars. I was nervous. The reviews weren’t so hot.  Turns out, three stars in Chicago is nicer than where we stayed for our honeymoon… so we were JUST FINE.  We walked approximately 4,177 miles.  We ate out for every meal.  We went to the planetarium. We went to Navy pier.  We left Navy Pier after about 45 seconds and headed to Rush Street for dinner.  We went to a midnight movie. We went to a midnight movie after buying tickets and then taking a nap at the hotel, BUT WE WENT TO A MIDNIGHT MOVIE. [Skyfall? 007, anyone?  That movie is incredible.  Javier Bardem… Lawd.  That man has some wicked in him.]  I sat in a bar waiting for a table and yelling for my school to beat Alabama… and they did.  THEY DID. We ate outside on the street patio and pretended we were young and free… and we were.   We sat in the park.  I ordered Coke with my breakfast- because I could.  I bought a shirt. Curt bought a grown-up jacket.  We held hands.  We ran into people we knew on the street and chatted like we were locals.  We passed people we knew (TWICE!) on the highway and texted them like it happens all the time.  It was an amazing weekend.

Somewhere in all that, Curt asked why we never have tuna casserole at home.  After I finished choking on randomess I said, “Well, I don’t know. I guess… I don’t know. We ate it every Friday growing up. I’m sure I can make that happen.”

Now, this is not my mother’s tuna casserole.  There is no cream of mushroom soup (since I married a man who falls on the floor and plays dead when he sees or smells a mushroom and I HAVE ENOUGH OF THAT DRAMA IN MY LIFE) and it’s quite a bit less-soupy? I dunno how to explain it.  It’s got tuna and noodles, though, so it’s tuna casserole.

The boy declared it to be in his Top 10 of my Awesome Dinner Achievements.  I’m still not quite sure how I feel about that, but I thought I’d pass along the recipe anyway.

Alright, Friends. Add or take away whatever you don’t like… maybe you need peas but no onions.  Maybe you need some garlic?  That’s just fine. I’ll never know.  The trick to this whole deal was the ROUX.  Watch me be fancy here: a roux is simply equal parts fat to flour and it makes a base for a sauce.  There are 4 tablespoons of butter and 2 tablespoons of flour (which is not equal, I know) but we use half of that butter to saute the veggies in at the very beginning.

SO. Saute your veggies in all 4 tablespoons of butter. Once everything is tender and there’s still a bit of butter in the pan, sprinkle the flour and salt on top. Doing this BEFORE adding the milk will coat everything nicely without making the sauce lumpy. Once your flour is mixed in there well enough, pour in your milk and let that simmer for just a bit until it thickens… the sauce will be barely boiling.  Now you can add your cheese in and heat until melted. Now mix in your tuna.

All that’s left to do is pour this over about 8 ounces of cooked and drained pasta, top with bread crumbs or crushed croutons, and then bake for about 40 minutes at 350°. BLAMO.  A new family classic is born. Couldn’t be easier.

What was on your family’s regular menu rotation as a kid?

So, last year was pretty memorable.

This year, Tuesday, there was that whole election thing going on… so, you know.  Hard to compete.

In 2004, we lived just outside of downtown at 650 Kellogg, the same house Curt had lived in his whole life.  Curt worked for Wolverine Building Group… where he’s worked since college.  I was a nanny and a part-time ropes facilitator at Camp Roger… which would soon swing into full-time.  We got Abe (our enormous horse of a labrador retriever) just a couple months after we were married.

We married at the neighborhood church… Eastern Avenue CRC, with stained-glass windows and wooden pews.  That Saturday in November was warm and sunny, like God knew half our visitors would be from Texas and California and a true Michigan November might kill them. Our ceremony took approximately 17 minutes.  We both carried some college debt into this arrangement, and I brought along my little s10 pickup truck to share the driveway with Curt’s Toyota 4Runner. My jeans had holes in them and Curt wore black Doc Martens to work.

A lot has changed in 8 years; a lot has stayed the same.  We moved 30 miles out of the city one month before Ry was born. Curt still works for Wolverine.  I stopped full-time work with when I was had Rylie, so it’s been 6 years since my W2 has read over $50.   We have 3 kids, 30 longhorn cattle, 20 chickens if the raccoons were kind last night, and Abe is still truckin’ along.  He is, by far, the most consistent thing in this family.  I drive an Odyssey now, like the rest of America with children under the age of 10, and Curt has upgraded to a grown-up car that cannot climb sand dunes on a whim. We are debt-free minus the house and property. My jeans still have holes in them, but Curt wears big-boy dress shoes to work now. I am a better cook than when we started, and Curt is less obvious about being bothered by dust. 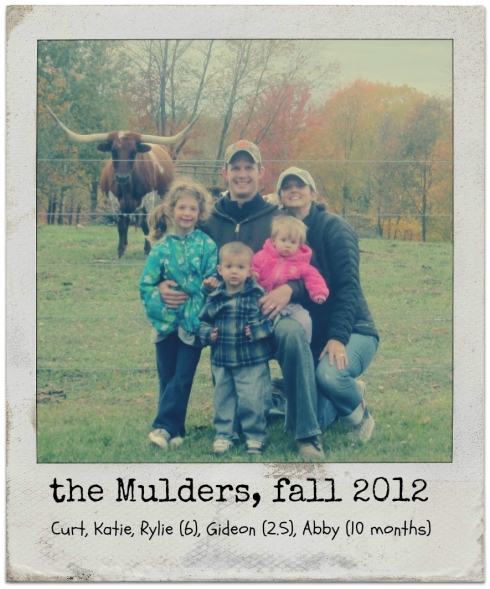 That’s Sugar standing guard there in the back.  We moved, like, 87 times for this photo and she’s in every shot.

OH MY WORD, it has been the hardest, most ridiculous, most fun, most maddening thing I have ever done… this marriage thing.  This living with a boy thing.  This sharing everything THING.  Hard. But worth it.  I would not, could not, change a single, blessed thing.

What do you remember?

How did you meet us?  Did you run track with Curt like the rest of West Michigan?  Do you remember Curt talking about the California girl from Texas? Do you remember me telling you I was getting married? Have you only known me AFTER marriage… as in, you call me KATE and not Katie? I would love to know where your story meets our story.